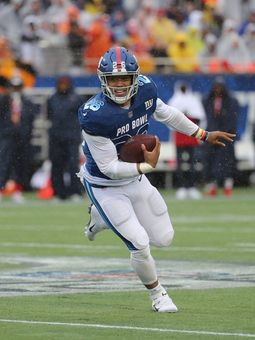 Some highlights, from start (Saquon) to finish (Donte)

We held the annual Experts Draft for our magazine last night. I'm not going to spoil the whole thing -- ya gotta buy the magazine, or at least skim through it in the store -- but it's a slow news day, so I thought I'd share some of the highlights.

Making the switch to PPR scoring. In the previous 15 years -- dang! -- of this thing, scoring has been standard. This year we're going to PPR. Several experts applauded the move. Not one complained. Looks like this is the world we live in.

Tyreek Hill in the 14th round. Until and if he's actually suspended or released, Hill probably won't go in the same place in any two fantasy drafts. Last night he went in the 14th, and I admit I kind of expected him to be selected earlier than that. One expert said he'd taken him off his board, hinting it was more out of personal distaste (understandable) than conviction that Hill wouldn't play this year. But Hill being drafted in the 6th, 10th, or 20th wouldn't necessarily have been surprising either.

All three Rams wideouts going within 10 picks of each other. Drafted in the fourth and fifth rounds, all very close. I thought that was kind of cool. I honestly don't know which one should be ranked highest. With Kupp coming off the ACL injury, I guess he carries the most risk. Anyway, all viewed comparably in the draft.

The bloom is off Aaron Rodgers. Rodgers was the 5th quarterback drafted, in the seventh round, closer to the 6th and 7th quarterbacks (Baker Mayfield, Jameis Winston) than the 4th (Deshaun Watson). Quite a change from the last decade or so, when Rodgers was the 1st or 2nd quarterback pretty much every year. So, value or not? I admit I'm not sold, but he still kind of looks good on a roster, at a mid-round price.

No consensus on Defenses. The Bears will go first in most leagues, and did last night. But after that it's a free-for-all. Last year's 2nd-ranked fantasy defense (1 point for sacks, 2 for takeaways, 6 for touchdowns), Kansas City, wasn't a top-15 selection. Neither was Pittsburgh. I've got a pair of defenses in my top 10 for this year that weren't selected nearly that early last night. I don't think there's much agreement on values at this position.

In general, I think it's going to be an exciting year for fantasy drafts. Most people will have theirs in August, and we'll have firmer ideas of values and who the No. 1 running backs are. But it's interesting to see how people value players prior to training camp, and think about what might change between now and then.