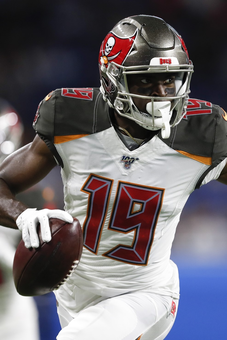 Probably the two best wideouts remaining on the free agent market signed yesterday. Robby Anderson agreed to a deal with Carolina, and hours later it was reported that Breshad Perriman agreed to a slightly cheaper deal with the team that lost Anderson, the Jets.

From a fantasy standpoint, there's not a lot of reason to get excited about either landing spot. Wide receiver was one of Carolina's few seeming strengths, with DJ Moore and Curtis Samuel, and new quarterback Teddy Bridgewater doesn't seem like an ideal passer to be throwing bombs to Anderson.

But former Baylor coach Matt Rhule will be instituting a new offense in Carolina, along with coordinator Joe Brady. Brady oversaw the passing game at Louisiana State that saw Joe Burrow throw 60 touchdowns a year ago. They're going to be passing the ball a lot, and they're going to have three wide receivers on the field pretty consistently. Don't pay attention to speculation that Carolina plans to now trade Samuel; there's room for three wideouts in this offense.

Perriman is a little more interesting to me, considering the wasteland the Jets have at wide receiver. The lone other notable wideout on the roster is Jamison Crowder. Quincy Enunwa (neck) might not play again. Josh Doctson has never put it together. Josh Bellamy, Braxton Berrios, Jehu Chesson, Josh Malone and Vyncint Smith are a laundry list of other teams' mid-or late-rounders who haven't worked out and/or maybe never will. I think it's very safe to ink in Perriman as one of the two main receivers for Sam Darnold -- maybe the No. 1.

Perriman was a bust with Baltimore, but had a strong finish with Cleveland two years ago, and then an even better one in Tampa Bay last year. With Chris Godwin and Mike Evans both hurt, Perriman closed the season with three straight 100-yard performances, at last looking like the first-round pick Baltimore drafted.

By going off that like in his fifth year in the league, Perriman really stands out from other first-round picks who did nothing at the beginning of their career.

Since 2000, there have been 77 wide receivers drafted in the first round. Of those players, just 16 of them never had a 500-yard receiving season in any of their first three seasons. If Perriman goes on to be a significant NFL wideout, he'll be the first of that group.

Treadwell, who signed with Atlanta last week, could maybe still emerge. Coleman just re-upped with the Giants; it's not yet over for him. Austin and Patterson have hung around the league, primarily for special teams contributions.

But if Perriman winds up being a top performer for the Jets, starting and pushing for 1,000 yards as a top target, he'll be breaking the mold. Most guys just never put it together if they don't show a little more early on.

Ugly history aside, I like his chances of being a viable player and late-round fantasy pick in the Jets offense. With his work in Tampa Bay last year, he's already shown the potential to leave that slow start in the dust. With the opportunity on New York's roster, things look even more promising.

In Nick Chubb and Kareem Hunt, the Browns have one of the league’s best running back combos. Both have had seasons with over 1,700 run-rec yards. This happened in 2010 with both San Francisco (Frank Gore, Brian Westbrook) and Washington (Clinton Portis, Larry Johnson). What is the only other team since that time that has entered a season with two running backs who at one point during their career had each gone over 1,700 combined yards? For said tandem, both grew up in the same part of the country (almost the same hometown).