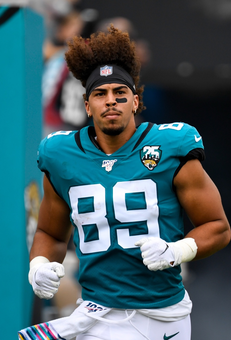 Can a tight end emerge after a lesser rookie year?

I saw somebody asking about Josh Oliver yesterday, wondering whether he’s worth a roll of the dice with a last-round pick. Oliver is the tight end Jacksonville selected in the third round last year, but he hardly got on the field because of injuries. Is he a better choice than Tyler Eifert?

As luck would have it, there are two other tight ends fitting the same profile as Oliver. Kahale Warring (Houston) and Jace Sternberger (Green Bay) were also selected in the third round, and neither was a factor in their first year.

Warring didn’t play at all. Oliver played only sparingly, catching 3 passes. Sternberger didn’t catch any passes in the regular season but had 3 catches in the playoffs (including a touchdown at San Francisco).

But with all three of these guys, they were selected with third-round picks. When a team uses a third-round pick on a tight end, it’s with the expectation/hope that he’ll be a contributor. Is there any chance any of these guys can get things going? (And could said emergence happen this year?)

I like to look at the numbers from the past on these kind of things. In this case, there is a player who has managed such a turnaround. Travis Kelce – a third-rounder with Kansas City in 2013. He was injured for most of his rookie year, then broke out in a huge way in his second season, with 67 catches, 862 yards and 6 TDs. He was the 6th-best tight end that year (using PPR scoring).

But Kelce-type players are rare. Looking at the last 30 years, I see two other tight ends who ranked 6th among tight ends in their second season after not doing much of anything as rookies – Marv Cook (Patriots) in 1990 and Kerry Cash (Colts) in 1992). And a handful of others in the teens.

In the last 40 years, I see 18 tight ends who didn’t rank in the top 50 at the position in their first year and then were able to put up top-20 numbers as sophomores. That’s an average of one every two years, but it hasn’t happened since 2014, with Kelce and Larry Donnell (who had one wildly memorable game at Washington early that year). Donnell caught 3 TDs in that game, but it was so unexpected that Donnell admitted that he didn’t start himself in his own fantasy league.

One other top-10 tight end in the last 40 years – Joe Senser of the Vikings in 1980. Who would have thought we would be mentioning his name twice this year on the website? He came up in the past as the answer to a trivia question – the only NFC North (previously Central) tight end who’s gone over 1,000 yards.

As for these three 2020 tight ends, I would rank them Sternberger-Oliver-Warring. Sternberger had the most intriguing college numbers, averaging 17 yards per catch and scoring 10 TDs his final year at Texas A&M. The Packers dumped Jimmy Graham and may be thinking Sternberger will be their guy. I haven’t stacked a draft board yet, but I would consider using a last-round pick on him as a backup tight end.

But the odds are against these three players.