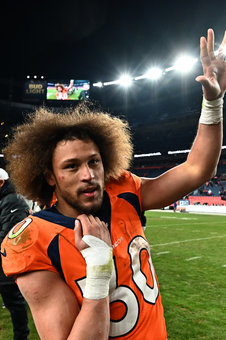 We keep a lot of different files, used to pull out different factoids about different players and position groupings. So when I see a news item about a particular player, I go hunting through the files to see if there's a particular stat or trend involving him that's interesting.

I actually went looking for James Conner info, having been burned by him this past season, on the heels of a story that Pittsburgh might well draft a running back early this year. But what stood out from the table that caught my eye was the difference between the Broncos various running backs.

Phillip Lindsay says he's ready to battle recently signed Melvin Gordon for the lead running back job in Denver. "I'm not just going to sit there and give somebody else the job," he says. And why should he? Lindsay might be the better running back.

Yes, Lindsay was undrafted, while Gordon was a former first-round pick. And now that Denver has given Gordon a big contract, expectations are that he'll be their featured back, with Lindsay a change of pace.

But it seemed a curious expenditure of financial resources from the Broncos. Gordon was severely out played by Austin Ekeler last season, part of why the Chargers made no effort to bring him back or meet his demands during his holdout. And in Denver, he's nowhere near as explosive as the guy they already had, Lindsay.

Last season, 45 different running backs had at least 100 rushing attempts. Gordon had just 2 runs of at least 20 yards, with those runs on only 1.2 percent of his carries. That was one of the eight lowest rates in the league, right down there with the running back Denver burned a third-round pick on two years ago, Royce Freeman. Lindsay had 7 such runs, and did so on more than 3 percent of his carries. That was a top-15 percentage.

The stat is interesting to me in part because of what it says about a lot of different NFL backs. Is it surprising to anyone that Peyton Barber, who attracted no free agent interest before signing on with Washington's crowded running back room, is at the bottom of the list? Or that LeVeon Bell, who had a terrible year for the Jets, is next to last? It's also unsurprising that impressive Bills rookie Devin Singletary is No. 1.

There were a couple of interesting results here. Gus Edwards (another undrafted guy) near the top; seems that he, too, has been underestimated by his team. And I would have thought Ezekiel Elliott would show up higher.

As for Conner, he shows up fairly low, as expected. In some early best-ball drafts I've seen, he's going a lot higher than I'd have considered him. Whether Pittsburgh uses an early pick on a back or not, I don't expect I'll be selecting Conner.

And relative to where they'll be selected in drafts, I'm a lot more interested in Lindsay than Gordon. It looks a little like another case of Denver trying to force something with one player, ignoring the fact they already had a better option on the roster.