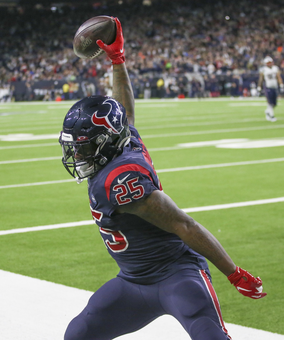 In yesterday's discussion/debate on Melvin Gordon, one of the things brought up was that in today's pass-focused NFL, it's not the running backs busting the big gains that are as important as the ones punching out the tough yard in crucial situations to move the chains. Which backs are best in those situations?

These are numbers we track during the season, extracting all of the 3rd-and-1 and 4th-and-1 plays for each team, as well as all the plays from the goal line. For this table, I decided to ditch the quarterback carries, so we're not spending time wondering which quarterbacks are better at sneaking the ball through a pile. I wanted to see just how running backs fared in those situations.

Included are all the running backs who had at least 5 such carries last year. With this stat, it isn't always about the running back himself. Ezekiel Elliott is great, no question, but he also enjoy great blocking up front (or has; with Travis Frederick's retirement, 2020 is a little less certain). When you see Nick Chubb and Saquon Barkley down near the bottom, it must be considered that they were operating behind two of the league's worst offensive lines last year; not that those guys are necessarily slouches.

And finally, when fullbacks like Derek Watt and Keith Smith show up favorably, their successes are coming on sneaky plays where the defense is caught off-guard -- expecting the tailback to get the ball.

In any case, here's the list. Straight off the numbers, Houston's Duke Johnson (pictured) -- largely viewed as a third-down back -- was best last season. Small sample set (I included all backs with 5 attempts, which snuck him in), of course. Worst was Buffalo's Frank Gore, converting on only 4 of 16 such plays. Gore (as we discussed a few weeks back) is likely headed to the Hall of Fame for having a long and productive career. But if his age wasn't enough to make the case, this stat is a clear sign that it's over.

Some big names show up poorly. Barkley and Chubb, as noted, but also Christian McCaffrey, Aaron Jones and Marlon Mack. Some of that can be blamed on the blocking, and some is also because of a particular runner having a target on their back. If Kyle Allen is behind center in a 3rd and 1 situation, what are defenses focusing on? I think it's interesting that Jamaal Williams (6 of 8) was more effective than Jones, but don't expect Green Bay to start pulling the guy who had 16 rushing touchdowns.

Kalen Ballage converting 6 of 7 chances is something I'm not sure what to do with. The guy averaged 1.8 yards per attempt last season. I guess if you need a back who can get you a yard at a key moment, maybe he's your guy (but he'll also get you no more than a yard or two on every other carry).

Other very effective backs last year include Kenyan Drake, Dalvin Cook and Derrick Henry. And new Falcon Todd Gurley, who I think could be a nice addition for Atlanta.

Gordon was 9 of 14 last season (64 percent); Austin Ekeler 7 of 9 (78 percent). Not a huge statistical difference, but at least there's no reason to think the Chargers, when they're browsing our website, will decide to take goal-line carries away from Ekeler. He can handle those chances.

So circling back to the original idea, I think there are some surprises in which players can be successful in this regard. It's not always the Elliotts or Henrys of the world; sometimes it's smaller backs, like Duke Johnson or Ekeler.

Jameis Winston last year had 7 interceptions returned for touchdowns. According to the Pro Football Reference website, that’s the most ever. Since the merger in 1970, who is the only other quarterback with 6 such interceptions in a season?