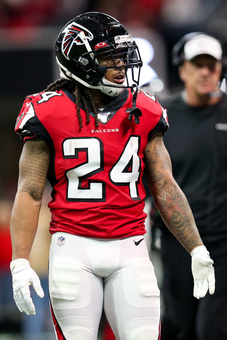 The Raheem Mostert discussion yesterday had me wondering just how many starting running back jobs are actually available in the NFL. I think we can all agree there are less than five; the question is if there are more than one. And how likely are any of them to be seeking to bring someone in? This is important not only for Mostert but unsigned guys like Devonta Freeman (pictured) and LeSean McCoy. Let's take a look.

That's 19 teams with a proven, established and in most cases highly paid starting running back. Maybe one or two of them (Baltimore? Pittsburgh?) has an eye on the future at the position, but both would be looking to elevate a youngster from their own roster -- not bring someone in from outside. Those teams aren't trading for a starter.

NFL teams who are probably set with their starter:

All three are second-year backs, who -- to varying degrees -- had successful rookie seasons. Sanders is being selected in the first round (second at worst) in early drafts. The Eagles have kicked the tires on bringing in a second back, but they're not looking for somebody to put ahead of Sanders. He's their guy.

Singletary showed enough as a rookie that he's starting in Buffalo. They'll pair him with another rookie, Zack Moss, if they want to lighten his load. Montgomery is similar. He's their lead back this year, and if he falters, Tarik Cohen will play more. Granted GM Ryan Pace makes some inexplicable moves, but most likely they're not bringing in anyone else.

Nobody knows for sure who the Week 1 starter for these teams will be, but it's about 99 percent certain it will be one of the two guys listed: capable veteran incumbent, or early draft pick.

The Dolphins signed Howard in free agency and traded for Breida. Likely committee. Washington drafted Guice early, re-signed Peterson, and drafted Gibson. They also have Bryce Love and even Peyton Barber. San Francisco will probably have Mostert as the No. 1 and Coleman as the No. 2 or 1a. These teams should be done bringing in running backs until 2021.

NFL teams who could maybe be thinking about bringing in someone else:

I'm trying to allow for the possibility of some team bringing in a veteran ala Mostert to start. The Rams obviously have no one proven at the position. Jacksonville seems to flirt with trading basically anyone on a regular basis; eventually they'll replace Fournette. New England doesn't tip its hand but they could already have decided that Michel is replacement level and Harris can't play. Jones had his moments for the Bucs last year but who really knows how the Bucs feel about him.

In short, I think there are four teams, tops, who might be interested in adding a running back. And realistically 2-3 of those are perfectly fine with their incumbents.

Conclusion: Barring injury in whatever passes for the preseason this year, Mostert isn't going anywhere, and an unsigned guy like Freeman won't necessarily be on a Week 1 roster. (McCoy might be fine with a backup job.) They'll be waiting for an injury to a starter. Good news for them is these guys get hurt a lot, and eventually there will be an opening. But they might need to be patient.