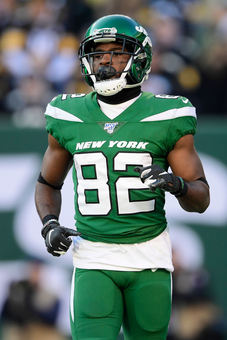 Ian Allan answers your fantasy football questions. In this edition: The best sleeper prospects. 2020 "It" player. Early rounds in a Superflex league. Which teams will be most affected by the novel coronavirus? And more.

With Deebo Samuel injured, who is your favorite sleeper and the receiver who will be drafted too late?

With “Sleepers”, I’m looking at where guys are on my board, and where I think they’ll go in drafts – players that I’m higher than the vast majority of other analysts. That group includes Hayden Hurst, Terry McLaurin, David Johnson, Hunter Renfrow, N’Keal Harry, Jace Sternberger and Jamison Crowder. I’ve seen a few drafts go by, and Crowder in particular is going much later than I think he should. Best players that I’ve seen not get drafted at all in multiple leagues: Jalen Hurd and Benny Snell. Snell, I think, is the backup running back to choose in Pittsburgh. There seems to be some kind of belief that Anthony McFarland will have some king of change-of-pace role for the Steelers, but he’s not a guy I would ever think about choosing with even a last-round pick. In my opinion, it will be James Conner starting, Jaylen Samuels in some kind of third-down or utility role, and Snell as the Conner clone who’ll step in if necessary (maybe with no dropoff). Maybe McFarland returns kickoffs, but it should surprise me if he finishes the season with fewer than a dozen carries and catches. With Samuel sidelined for perhaps the first month of the season, I think there’s a chance Hurd not only starts but is their most-productive wide receiver in September.

Each year it seems, there are 1 or 2 "It" players ... players that just blow the doors off, and no matter where they were drafted, high or lo, they seem to surprise ... and they are almost always found on the eventual winning/finalist team in your league. Last year it was Jackson. In '18 it was Mahomes. And in years prior there were IT players like Gurley, Elliot, David Johnson, Cam Newton, Antonio Brown, Peyton Manning. Who are the best candidates to exceed their rating so spectacularly and to such winning effect this year?

Three years in a row, a second-year quarterback has crushed it: Wentz, Mahomes, Jackson. That will help push up Kyler Murray on draft boards (especially with the Cardinals having added DeAndre Hopkins in the offseason). But as somebody was pointing out on the website last week, Baker Mayfield was the Murray-type prospect last year, and it didn’t go well. How about Saquon Barkley? He’s certainly a transcendent talent, and they’ll be using him differently this year. I expect they’ll do a better job of sticking with the run.

Glad to see the magazine endorsing SuperFlex leagues! So in a 12-team league that offers the option of starting a second quarterback, how should that change my draft strategy? Is waiting until the mid-rounds still a sound plan, or should I take care of that position earlier?

Everyone has to have two good quarterbacks, and you really want three to nail down that position, considering there will be byes, injuries and poor matchups. (Maybe some guys sit out with positive coronavirus tests – who knows?) But we also need to look at the relative differences between the tiers at the position. There are guys like Jimmy Garoppolo, Tom Brady and Aaron Rodgers who are top-15 quarterback prospects, but how much better are they then some of the guys who don’t even project to be backups. According my projections, Sam Darnold and Derek Carr are outside the top 24 – they’re No. 3 QBs in your league – but they not all that far back statistically (about 2 points per week, I think). So I’m not super excited about using my second-round pick on a quarterback if I know I can get Gardner Minshew and Sam Darnold much later at more favorable price points (giving me a stable of three quarterbacks to work with). When I push the numbers around, I’ve got quarterbacks as 14 of the first 42 players on my board. In those first three-four rounds, about a third of the players chosen should be quarterbacks.

Pretend that the season is going to go on as planned, but that training camps, practice schedules, and team meetings are disrupted significantly by COVID issues. How does that impact your thoughts on positions to draft if at all? Do you think that makes a stud QB like Mahomes or WR like Michael Thomas safer than a top RB whose offensive line hasn't had time to practice together and gel? Since RBs rely on scheme and blocking, wondering if WRs and QBs from teams that have consistency and very few offseason moves will make more sense to draft in the early rounds this year. I realize QBs need blocking too but curious if you think there's any merit to certain positions being hurt more by COVID than others.

I think it favors the veteran teams that have everything in place already – coaches, players and offensive system. Kansas City is looking very good for sure; I don’t think it needed the offseason work as much as most of the other teams. And the pandemic could be good for Baltimore – making it harder for opponents to properly figure out that unconventional offense. The degree of difficulty, meanwhile, goes up for the rookies and the start-from-scratch teams like Carolina. That said, every case is different, and some will do a better job than others of figuring things out. There wasn’t much of an offseason back in 2011, and three rookies that year had really good seasons – Cam Newton, A.J. Green and Julio Jones. Mike’s point about running games, I think, is a good one. Offensive lines need to get their timing down, and that tends to show up more when teams are trying to run the ball. A few years back, I remember the Seahawks talking about that – how they’re running game usually didn’t click until October, when the backs and blockers get their timing properly dialed in.

I have the 36th and 37th pick, in standard scoring system. The choice between D Johnson or K Hunt. I have read your index 2x. I understand the data, but looking at the coaches, o line, schedule, number of plays per series ie johnson 3 plays per series , Hunt maybe 1 or 2. I need a choice for my rb3-flex spot.

If Nick Chubb weren’t around, I think Kareem Hunt would be a top-5 running back. Kevin Stefanski, I think, will make those backs look good. I think they’re going to run the ball a lot more, and I also think they’re going to use the running backs more often on dumpoff passes. When Stefanski was operating Minnesota’s offense last year, they ran the ball on 49 percent of their plays – 3rd-most in the league. Their running backs at the same time combined for 855 receiving yards, 4th-most in the league. But unless and until Chubb is removed from the equation, Hunt should be trapped in a change-of-pace and third-down role. I don’t think he should be one of the first 25 running backs chosen. David Johnson, on the other hand, should be heavily used by the Texans, both as a runner and catching a healthy number of balls. I think Johnson will be one of the first 20 running backs chosen in most drafts, and in my opinion that’s too low – he should be going in the top 15.