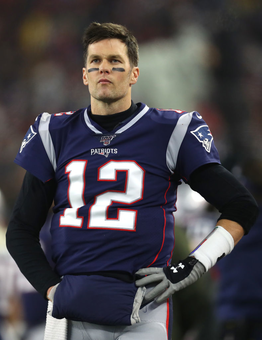 Which player who changed teams are you excited about?

ASK THE EXPERTS appears weekly from training camp through the Super Bowl with answers to a new question being posted Thursday morning. How the guest experts responded when we asked them: Which player are you most looking forward to seeing with their new team?

I love Tom Brady in Tampa Bay. And with Gronkowski! Hell... Tom Terrific has three significant tight ends in O.J. Howard and Cameron Brate! And Mike Evans and Chris Godwin...oh my. Add in a chip on the 43-year old's shoulder (happy Birthday GOAT) and it is firework time. Figure 4,600 yards, 30 TDs and 12 INTs and a whole lot of fun to watch. Pass the popcorn.

When players move to new teams, they more often than not become good values since they receive a decrease in expectations away from their old team. DeAndre Hopkins is an easy answer here but he's going to remain an elite player regardless of where he plays. And while Melvin Gordon is very interesting in Denver, I have to go with Todd Gurley. So much to answer -- is he still an elite back or just a hobbled ex-stud? The Falcons have a great rushing schedule this season which will ease the transition and there's no one else of any note there to steal away carries. He could break down and disappoint of course, but this is his chance to rebound and show he has something left in the tank on a team with an excellent passing game and schedule.

Dorey co-founded The Huddle.com in 1997. He's ranked every player and projected every game for the last 23 years and is the author of Fantasy Football: The Next Level. David has appeared on numerous radio, television, newspaper and magazines over the last two decades.

I am really curious to what Tom Brady will be able to do with more weapons around him in the passing game and without Bill Belichick micro-managing him and taking the fun out of the game. I bet we will not only see a more productive Brady, but also a happier one.

Nazarek is the CEO of Fantasy Football Mastermind Inc. His company offers a preseason draft guide, customizable cheat sheets, a multi-use fantasy drafting program including auction values, weekly in-season fantasy newsletters, injury reports and free NFL news (updated daily) at its web site. He has been playing fantasy football since 1988 and is a four-peat champion of the SI.com Experts Fantasy League, a nationally published writer in several fantasy magazines and a former columnist for SI.com. He's also won nearly $30K in recent seasons of the FFPC High Stakes Main Event. www.ffmastermind.com. Nazarek can be reached via email at miken@ffmastermind.com.

Hayden Hurst. He wasn’t used much in Baltimore, but as far as I can tell, he catches the ball just fine. He’s getting plugged into a pass-heavy offense in Atlanta, and I’m expecting he should be able to do pretty much all the same things that they were getting out of Austin Hooper. A possible top-5 tight end, I think.

Allan co-founded Fantasy Football Index in 1987. He and fellow journalism student Bruce Taylor launched the first newsstand fantasy football magazine as a class project at the University of Washington. For more than three decades, Allan has written and edited most of the content published in the magazines, newsletters and at www.fantasyindex.com. An exhaustive researcher, he may be the only person in the country who has watched at least some of every preseason football game played since the early 1990s. Allan is a member of the FSTA Fantasy Sports Hall of Fame and the Fantasy Sports Writers Association Hall of Fame.

I look for DeAndre Hopkins to fit in nicely with Kyler Murray and Kenyan Drake in the Cardinals' developing offense. He will have the most impact on his new team among the major players changing teams in 2020. My initial reaction was to say Brady, but we must keep in mind that Jameis Winston, other than his excessive INTs, was on fire fantasy-wise in 2019.

Nease has written about fantasy football since 2001 and has played the game since 1985. Mike is a senior staff writer at Big Guy Fantasy Sports. In 2018 and 2019 he won the championships of four experts' leagues: FF Webmasters, FanEx Analysis Draft, FanEx Auction league and also the FanEx Main Event. He also won the Couch Tomatoes Auction league in 2018.

Since unexpectedly purchasing Tom Brady in the Experts Auction, I am definitely excited about his prospects for 2020. Tampa Bay has an unsettled running game, so reasonable to assume that the GOAT will be throwing more than usual this season. However, it's not just that uncertainty, Tampa Bay is loaded at WR/TE. Mike Evans is tall and talented, poised for his best year to date. Chris Godwin burst onto the scene in 2019 and should be even better this year. Gronk is rested and refreshed, and above all, really motivated to make the "let's get the band back together" reunion with TB12 strategy pay off. O.J. Howard and Cameron Brate are really talented, too. About 35-40 TDs shouldn't be surprising to anybody.

Sachs runs Perfect Season Fantasy Football, offering LIVE Talk & Text consulting. He has multiple league championships including 2 perfect seasons. Scott is a past winner of the Fantasy Index Experts Poll and a 2-time winner of the Experts Auction League.

The one guy best positioned to do more with his new team than he did with his old team has to be David Johnson, now of the Houston Texans. Sure, it was a comically bad trade, not only in terms of what Bill O’Brien paid to acquire Johnson but also in terms of what the Texans will pay Johnson going forward. But a bad trade for the team is not a bad trade for the player. DeAndre Hopkins leaves a ton of targets behind him; Johnson is a remarkable pass-catcher, and neither of the new receivers (Brandin Cooks, Randall Cobb) inspire much confidence at this point in their careers. And meanwhile O’Brien is absolutely certain to feed Johnson all game every game, both to justify the trade and because he is the very sort of genius who thinks that if running and winning are correlated, that must mean running is all an offense has to do to win. Expect an absurd workload and numbers well north of what Carlos Hyde produced in 2019.

Eleff hosts the Fantasy Index Podcast, available in the iTunes Store now. He has worked for Fantasy Index off and on all century.

I don't think I can fairly use the word excited to describe any of the big-name players tied to team changes. We've been drilled to distrust pass-catchers for their first new season, especially if the move involves a promotion in role, and obviously the 2020 preseason presents unique challenges. By default, I'll center on Tom Brady, who is getting a fresh influx of playmaker help at a time he desperately needs it. That said, Brady has no significant rushing component to his game, and he is entering an age-43 season. This draft season, I'll lean into continuity when I can.

An FSWA award-winning writer (with nominations in four sports) and podcaster, Scott has been with Yahoo Sports since 2008. On the rare occasions when the computer is turned off, he enjoys word games, poker, music, film, game theory, and a variety of condiments. He lives in suburban Detroit.

Tom Brady's departure from New England and arrival in Tampa has such an impact on many different players. Not only do we get to watch the fascinating drama of how the Patriots and Bill Belichick move forward without Brady under center, but Brady himself is such a contrast from Jameis Winston, who put up superb numbers in Bruce Arians' offense last year. We know Brady will be a huge upgrade as far as limiting turnovers, but without those downfield opportunities, will Chris Godwin and Mike Evans be as good? That duo is far and away better than any Brady had to target during his Patriots' tenure, so it will be interesting to see how those targets are distributed and how Rob Gronkowski rebounds after a year off. The Bucs also have an unsettled backfield and Brady's New England offenses were almost always among the league leaders in rushing touchdowns.

Smith’s work can be seen at FantasyData.com.

While the quarterback moves are fascinating, I'm particularly interested in two running backs who will be drafted as starters in every fantasy league. The Texans are hitching their wagon to David Johnson, and the Falcons are doing the same with Todd Gurley. We all have questions about the durability and health of both players, but the team investments and talented quarterbacks they're working with should mean both running lanes and a sizable passing game role as long as they are on the field. While neither back is as "safe" as the ones being taken in the first two rounds, who generally are younger and healthier, both have similar if not better upside as potential three-down backs in high-powered offenses.

Richardson has been a contributing writer and editor to the Fantasy Football Index magazine and www.fantasyindex.com since 2002. His responsibilities include team defense and IDP projections and various site features, and he has run the magazine's annual experts draft and auction leagues since their inception. He previews all the NFL games on Saturdays and writes a wrap-up column on Mondays during the NFL season.