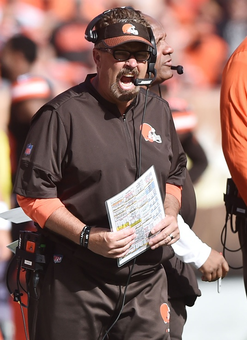 I am not a fan of Gregg Williams. In two of the last three years, we’ve gotten to see his act on Hard Knocks, and it’s apparent he’s not much of a coach. He’s not someone who should be the coordinator of an NFL defense.

Williams is a screamer. As we saw with the Rams in 2016, and as we’re seeing again with this year’s installment in Cleveland, his idea of improving a defense is rip into his troops with F-bomb saturated tirades. ‘That’s f---ing garbage. That’s f---ing unacceptable. You need to f---ing get to the f---ing quarterback or I will f---ing bench your f---ing ass.”

Williams is just trying to turn up the heat and make people play faster and harder. That’s fine, I suppose. That’s one tool that can be used. But there’s no coaching that’s occurring. There’s no explanation of why breakdowns are occurring or adjustments that need to be made. Williams is putting all of his eggs in the basket that people just need to try harder.

To me, he seems like a bad high school coach.

I pulled out his historical record. The Saints won at least 11 games in all three of his seasons there. (Williams, recall, was the central figure in the BountyGate controversy there.) But 8 of his last 10 other teams where Williams was a defensive coordinator finished with losing records.

Most of Williams’ defenses have been average against the run. That’s using fantasy scoring (6 points for touchdowns and 1 for every 10 yards). Unusually average (9 of his last 12 defenses have ranked between 12th and 19th in run defense).

Typically his groups will make stopping the run a priority. (Fast-forwarding to Week 1, with LeVeon Bell showing up rusty, I don’t expect the Steelers to come into Cleveland and finish with above-average rushing numbers.)

His defenses haven’t been as good against the pass. Four of his last six teams have ranked 22nd, 22nd, 25th and last in passer rating (the NFL’s complex grading system that blends touchdowns, interceptions, average gain and completion percentage).

On HBO’s documentary, we only get a brief look at Williams. But to me, he doesn’t come across as a coach who should be making key decisions. I don’t think he’s good enough.

For fantasy purposes (this is a fantasy site, yes?) sacks are key. In that regard, Williams looks like a slightly below-average option. His last 14 defenses have averaged 32.5 sacks per season, which is a few below the league average. In his first three years with the Rams, Williams’ teams finished with 52, 40 and 41 sacks, but those teams had a lot of talent on the defensive line. None of Williams’ last nine other teams have finished with more than 35 sacks.